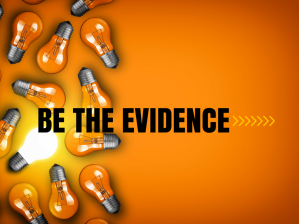 A huge ship holding over 3300 people hit an iceberg. Over the next few hours it would sink to the bottom of the North Atlantic. That ship was the Titanic.

Researchers and divers know the spot. And recently a new picture was released. It shows 2 boots and a coat. Experts say these didn’t just fall out of a sinking suitcase.

Based on how they are positioned on the bottom of the ocean, 2.5 miles under the surface, they are most likely the spot of someone’s final resting place.

From there, travel west to Prince Edward Island. In 1995, nine-year-old Michael Arsenault found what was later determined to be a fossil. It was a lizard-like reptile under a foot long.

As CBC reported, “It is the only reptile ever found from the five-million-year Gzhelian Age that started about 304 million years ago. As such, it helps fill a gap in the early evolutionary history of reptiles.”

From there go inland a bit more, still in the Maritimes. A family in Dartmouth, Nova Scotia was doing renovations and found a letter in the wall. And then another.

In total, they found 31. They were love letters written between Captain Graham Roome and his fiancée Annie Hollett during the First World War while Roome fought overseas. For some reason they were stored in the wall of their Nova Scotia home.

The Mackinnon family, who found the letters, later tracked down Roome and Hollett’s descendants to return the letters. They discovered that after the war they got married and lived a long, happy life together.

But those letters tell a story.

Something was left behind as evidence of life. And love.

Now jump over to Ontario when my public school class went for a trip to the Yearly Education Centre, a place where you make your own meals, play capture the flag, pass notes to girls, and hone your canoeing skills.

Out in a field one afternoon a teacher asked if we could identify where a pioneer home used to be. We looked around and made some guesses—pretty much wherever there was open space.

We were wrong. She showed us a clump of trees. We were puzzled.

She explained that when the log home was abandoned and started to decompose, the logs made the soil rich. So new trees grew up through the foundation.

And then to the biblical military leader Joshua well over 3000 years ago. As he led the people through the Jordan River he told the leaders from the 12 tribes to each take a stone out of the river and set it up as a memorial so that future generations could remember what happened.

Something was left behind as evidence of life. And of God’s power.

These stories of evidence were how I began a talk on May 31st at something called “Heritage Day” at Langford Cemetery in Bracebridge, Ontario.

As we all gathered around, we were standing in the midst of evidence. Headstones and a columbarium engraved with names, dates and a few other words, and flags for the veterans who were buried there, reminding us of the lives lived of those we loved.

And continue to love.

My dad’s remains were buried there in November and it was a day when our family could gather around his newly placed headstone.

Many things are left behind as evidence of life and love: headstones, a favourite place, a letter, an old shirt.

But we often neglect what is perhaps the most significant piece of evidence left behind.

And that evidence is you.

You and I are the walking, living, moving, breathing pieces of evidence that someone’s life made a difference.

More than any headstone or fading picture.

Be the evidence that someone's life made a difference.

Most of us have lost someone significant in our life. A friend, a sibling, a child, a parent… So remember that you are the walking, living, moving, breathing pieces of evidence that their life made a difference.

Keith Willhite had a good idea. He was diagnosed with terminal brain cancer in his early forties. He was married with two children—one in public school, and one about to become a teenager.

He knew he didn’t have long to live. So he went to his study and started writing letters. Letters to his children for after he was gone. He then entrusted them to his wife.

As Ace Collins tells it in his book GrATTITUDE, when his kids hit significant milestones in their lives, they got a letter from dad, even though he was not there in person to deliver it. They were filled with love and encouragement and inspiration.

For example, when his daughter Katie got her driver’s license she was handed a letter full of pride. When she went on her first date she got another; and when she graduated from high school she got one full of congratulations.

He even wrote letters for his future grandchildren should there be any!

For Keith Willhite, he left behind letters as evidence of his life and love.

I don’t expect any of us are going to sit down tonight and write letters like that.

But know this: We are the letters of someone else’s life. We are the walking, living, moving letters—breathing bits of evidence that someone’s life made a difference.

Evidence of life is all around us: Boots and a coat at the bottom of the North Atlantic; a fossil in P.E.I.; love letters falling out of walls in Nova Scotia; a clump of trees growing up through the remains of an old pioneer home; a pile of stones beside the Jordan River.

But there’s another kind of evidence too. 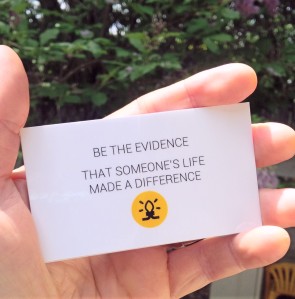 As I spoke at the Heritage Day event, I then handed out the cards seen in this picture to help us remember.

And then I gave a very personal and practical example for how I see this working in my own life.

My dad and mom really prioritized us kids. You didn’t see them out in fancy restaurants very much because they were saving money to put us through university or college.

And they logged a zillion miles driving us around the province (and beyond) to hockey games and music performances.

So I ask myself: Am I evidence that dad’s life made a difference?

Whenever I push Anna in her swing; whenever I take Benjamin for a 4-wheeler ride; whenever I read Sarah another story, I think… Yes.

Have you loved and cared about someone who has died? Have you wondered about how to remember them well? Me too.

You can sign-up for “Up!” by clicking here—my new 1-minute daily email devotional. Get up, look up, be up!

Persistence without insight
Christ will wipe it off
Return hatred with love
Don’t confuse a battleground for a playground
Follow MatthewRuttan.com on WordPress.com