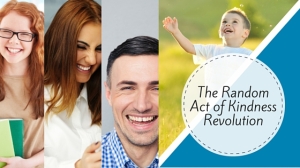 A woman didn’t have enough gas for her car. It was late in the evening, the gas station had changed its hours, and was now closed. But she needed to get to town to pick up her son. Pronto.

Someone on the other end of a screen offered help.

“I don’t know what possessed me to do this,” she wrote to me. “I normally don’t lend my car to people, especially people I barely know… [But] I offered her my car. She had enough gas to get to my house once she found out where I lived. She was there in 6 minutes and had the car back to me within the hour.”

Wow. It was a random act of kindness. Or “RAK” for short.

It’s an un-predicted act of kindness toward someone who needs it because… well, they’re human and life throws curve balls.

According to best-selling author and pastor Tim Keller, Spirit-led kindness is “an ability to serve others practically in a way which makes me vulnerable, which comes from having a deep inner security.”

Oh, and RAKs keep giving birth. The kids’ names are joy and hope.

Here’s where I’m coming from:

A few months ago I was in the corner store. A lady in front of me was buying some Doritos and dip but didn’t have enough money. So I bought them for her. No big deal.

She turned and said, “I don’t even know you and you’re doing this huge thing; I think I’m going to cry!”

It was only Doritos and dip! But it was more than that. It was a random act of kindness that said, “Hey, kindness isn’t endangered. Good things can still happen.”

So here’s what I did. 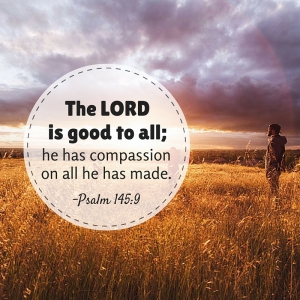 I write a 1-minute daily devotional called “Up!” So thinking about this Doritos experience and Psalm 145 where it says “The LORD is good to all” I thought to myself:

Why not encourage others to engage in random acts of kindness?

So I invited all the people on the other end of “Up!” to send me their ideas so I could share them with others. Not only would it encourage us because we would see kindness at work, but it would give us ideas for how to inject more kindness into a bruised and bruising world.

Many of them did.

Peter told me about a random of act of kindness he received while on a business trip to Washington. He was walking to the subway to visit the Smithsonian museum.

On the way Peter passed a man in dirty clothes who asked for money. But he didn’t have any change so couldn’t help. Next thing you know Peter is at the subway kiosk to get his ticket only to find out it is cash only.

Clearly forlorn, he looked around wondering what to do. And up came the homeless man he had just passed… who paid for Peter’s ticket from the change in his own pocket!

Peter thanked him and rushed off to the bank machine to pay him back. But when he returned, the homeless man was gone.

Then there was the man who handed out roses to people at a baseball game on his birthday while singing Happy Birthday. Everyone was confused, but laughing and uplifted!

After he died, his daughter continued the tradition. As I was told, “It made everyone happy to receive this rose out of the blue.”

And then Mary. Years ago she was having a very bad day. All three of her children were sick and she was sitting on the floor crying when there was a knock at the door.

A lady from church had a cardboard box in her hand. Inside was a casserole and a bottle of canned peaces for dinner. Perfect timing!

Another random act of kindness.

Karen’s mom was sick and in hospital. It was serious. Her dad’s sister and her husband from Toronto hadn’t been a huge part of their lives. But then they started to come and visit, showing up and having coffee together in the hospital cafeteria. As Karen wrote, “At a time of fear, sadness, exhaustion and frustration, all they had to do was show up and I was lifted up.”

And then this grace-infused conversation. A married couple dealing with cancer sat in the hospital guest room when they met another man. He was wondering how he would cope with the crush of cancer about to bare down on him.

“We talked to him for the next 2 hours about how we, with the help of God the Father, Jesus, the Holy Spirit, and our church, had been given the strength to face the future, be positive, and enjoy the extra time we have been given together.”

This cancer-fighting couple, marked not with anger but with gratitude, told me that the experience helped them realize why God had given them a bit of an extension of time on their lives: “so that we can offer help to others when the need arises. Thanks be to God.”

Walter’s story is set in Rome and tells of another RAK received.

After 3.5 hours he and his family were still on the outskirts battling 6 lanes of traffic. The 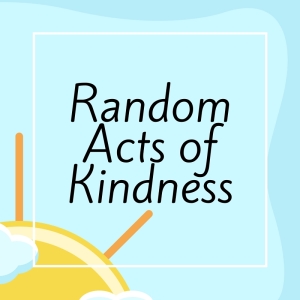 y stopped at a gas station for directions. But as they went to leave, someone in a car in front of them was waiting. They motioned to follow, and led Walter into the heart of Rome, right to the hotel where they needed to go. This nameless stranger saved them enough time to gain another whole day of visiting in a foreign city.

Remember what I said about RAK’s kids? They’re names are joy and hope. And they might be coming for a sleepover at your place.

But why a “revolution?”

Well, I’m not sure if this technically qualifies because a revolution is when something hits a tipping point and things end up differently. There’s a regime change and the ruling force is replaced.

It’s going to happen eventually, so you might as well get in with the winning team now.

Wouldn’t that be great? An avalanche of amazing grace. A tsunami of charity. A hail storm of joy.

Lastly, this story shared by a friend:

A little girl was very sick. She needed complicated intestinal surgery in Toronto.

Her parents saved up some money—and were given some more—to stay at Ronald McDonald House so that they could be close to their little girl while she had treatments. They needed to be there for three months.

Even though the accommodations are very affordable, expenses add up—especially if you’re not working during that period.

Through time, the little girl got better. But the parents remembered how difficult it was. So they save up some of their own money, and collected donations from family and friends.

One evening, the mom again traveled to Ronald McDonald House. She discreetly met with a staff person, and donated all the money they had raised to pay for the stay of another family struggling through a similar situation.

Later that night, after the mom was gone, an unsuspecting family surely up to their ears in tears and fears learned that someone had secretly paid for their stay.

Hope muscles her way through the naysayers to the edge of a ledge and prepares to fly.

As Mark Twain said, “Kindness is the language which the deaf can hear and the blind can see.”

"Kindness is the language which the deaf can hear and the blind can see." Mark Twain

Not doing something good in a Goliath world because it “won’t make a difference” is usually an excuse to remain insular, to self-protect.

But with God, molehills have a habit of becoming mountains. Eventually, Goliath falls.

You can’t do everything. But you can do something.

Sometimes the best way to stand up for someone, is simply to stand beside them.